My favorite thing about Dota is the investment. Dota’s large time commitment allows the stakes of each match to be huge. Your character, your team, your opponents, and even your role evolves as the match progresses. Match length allows for deep strategy to happen on a micro level that affects macro gameplay objectives; the largest one being how your character’s farm (how much experience and gold you bring in) effects battles and map control over your opponents. This investment is also easily the thing I hate most about Dota.

When I go to play a match, I have to make sure that nothing else can interfere. I have to strategically plan when I can play. Have to make an appointment in an hour? No way I can fit a match in. Meeting up with friends soon? Dota’s a no go. Get home from work and have to make dinner, go to gym, and get other chores done? Where the hell can I fit an hour match in? Dota requires you to make it priority number 1. It eats up entire evenings, afternoons, and mornings if you let it. 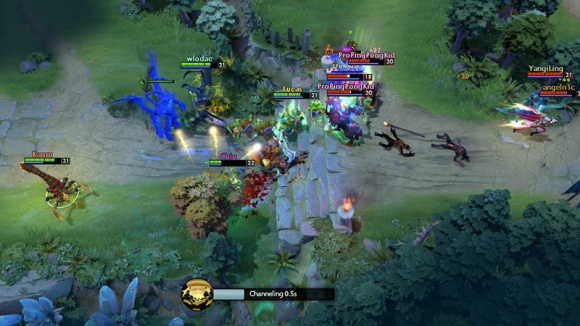 Even if you do set aside just enough time to squeeze in a match or two (I rarely have time for more than one in a sitting) the physical investment is no joke. Matches require your full attention and leaves no opportunity for you to step away from your computer to do anything else. I usually run through a quick checklist before I start a match:

Besides the insane details listed above, the emotional investment is where Dota really becomes an exercise in masochism. The team nature of Dota requires all 5 players to actively play their roles well (or at least have one extremely good carry depending on MMR). You have to pay attention and have an understanding of the game that is frankly intimidating for new players. Knowing when and where to assist or take things for yourself is important for game objectives and team wellness. If even one player slips up, there goes an entire 45-60 minutes wasted. Defeats are agonizing (I’ve written about my experiences losing in Dota before) and are only offset by the extreme highs of victory. Having a run of defeats is demoralizing; I often have to stop playing Dota for months if I end up with a string of them. I also have to be energetic to play Dota; if I’m tired it shows. Lazy play on my end means a defeat for my team and a chat full of expletives aimed straight at me.

So why play Dota? More importantly, why make time for Dota? That’s something every Dota and MOBA player is still figuring out. It’s those extreme highs really, the shot of adrenaline that comes with every strategy that succeeds, every play that comes out right. Now I just need to free up that schedule of mine to play it…

[…] I can only imagine that the game will be at worst a pleasant and easier way to jump in and out of a MOBA without eating up my schedule. This could also attract a much more diverse audience which will hopefully help skew away from the […]